THE solution for a million young families

Share with others:
Tweet
Slovenian startup Sleepy Bottle developed an innovative bottle that enables the preparation of fresh adapted milk in less than ten seconds. While on holiday with friends and their three-month-old son, Rok Colarič, started to think about a solution for the long sleepless nights of young parents. "During the night meals, the whole house was up. Not so much because of the hungry baby, but rather because of the half-sleeping dad whose task was to heat the water, wash the bottle and generally awkwardly handle the task at hand. After several days of non-sleep, I said to myself, there must be a solution for this," says Colarič.
This was followed by a period of observation and conversations with friends who had infants who did not breastfeed, "I have found that each of them is struggling with the preparation of adapted milk in their own way, but there was a common denominator. Preparation time. The fastest was prepared in a few minutes, while some needed a good half an hour or more," said Colarič, who has been developing the bottle, together with Lenart Grkman and a 14-member team, for the last three years. 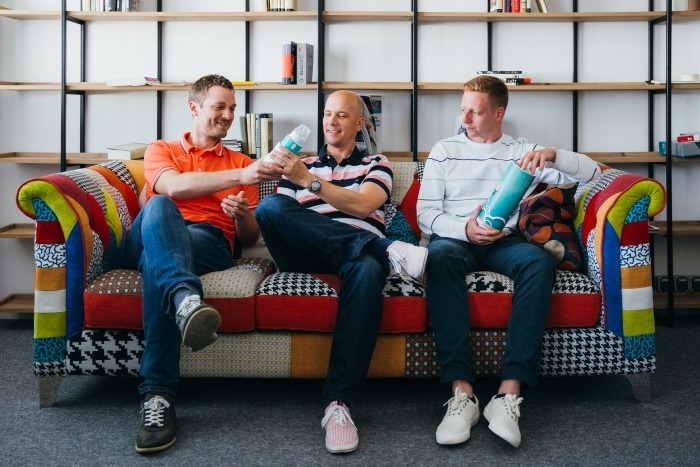 The Sleepy Bottle Team (from left): Nace Novak, Rok Colarič, Lenart Grkman. (Photo: Sleepy bottle)
The bottle not only facilitates the preparation of adapted mild during the night but is also handy on the go. “The bottle is light and can be connected to various power supplies," Colaric says, about the benefits of the bottle, but underlines that its greatest added value is the time of milk preparation. "The device requires a bit of pre-preparation from the user since the bottle with water and the adapted milk in the heater should be inserted about 30 minutes before preparing the meal. However, the findings show that this does not present major problems for parents," said an entrepreneur who attracted the attention of Andy Baynes, the former leading company at Apple, Nest, and Google. He is now a mentor and an investor in the startup, which took its first steps in the ABC Accelerator’s startup programme.
With his input, the startup gained an open door to Exertis, a distributor which cooperates with more than 750 global technology brands and generated of 3.5 billion EUR of revenue last year. The sleepy bottle will be sent to the Slovenian and English market within a month. The entire world market represents as many as 100 million infants, who are fed with adapted milk. "Next year, we will spread across the European markets and begin to penetrate the US. We are aware that China is the most interesting market for our product, but we will hold on that for now, "said Rok Colarič. He further explained that they want development and production to remain in Slovenia. In the near future, they will most likely open a company in the UK to ease cooperation with foreign partners and the search for a new investment that they will need for marketing activities.

Read the full article on Dnevnik.si (in Slovene).