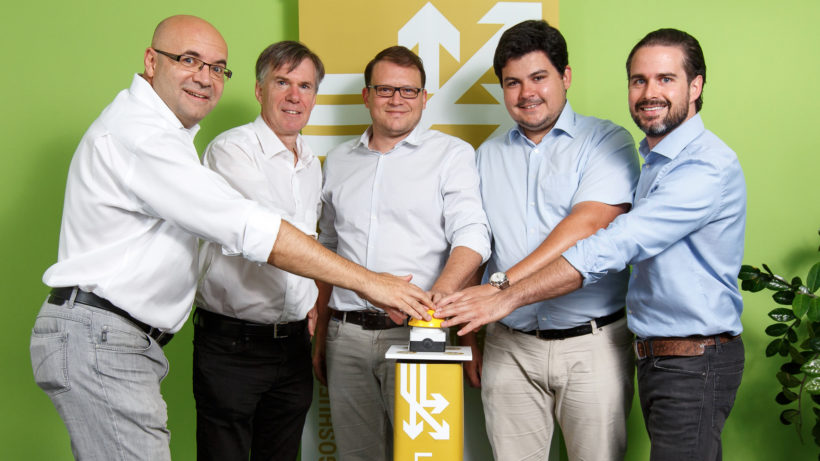 The Graz startup Logoshuffle, which developed an online tool to easily create logos, is attracting growth capital from KaPa Ventures and Up To Eleven. The product of the Graz startup is quite easy to understand. With the online tool, which works with the help of AI, among other things, logos and corporate design kits can be created as easy as 1, 2, 3. Their strong selling point is the price since professional agencies are often unaffordable for small businesses, startups and clubs. You can also shop for various branded products right there on their website. Full service, indeed!

Embarking on a ‘huge’ market

The tool can generate more than 150,000 logo suggestions per day and has already convinced around 100,000 registered users. Still, there is enormous potential ready to tap into, especially in the US market. KaPa Ventures and Up To Eleven want to help the team realize this goal, that’s why they invested a mid-6-figure amount. The latter had already invested in the startup in early 2017. According to publicly available company data, the Graz company builder already holds 38 percent of the company. The two co-founders Martin Schmidt and Christoph Lalej have so far kept 60 percent.

The ‘espresso shot’ of fresh capital will flow primarily into the development of the artificial intelligence of the logo generator and the more intensive processing of international markets such as North America. They already have a large customer base in the DACH (Germany, Austria? and Switzerland) and Anglo-American region, accompanied with a strong presence in other international markets such as Singapore and Morocco, said CEO Martin Schmidt.

Their international orientation is also what convinced the investors. "Even including all their experience, it’s the innovation-oriented founders, that convinced us for the investment," said KaPa Ventures co-founder Frank Kappe in a press release. Together with his partner Gerhard Pail, he holds shares in a total of 16 startups, including mything, own3d.tv, hiMoment, Meisterlabs, Onepoint and Get in Shape. From Up To Eleven, the head of the company builder, Matthias Ruhri added, "With Logoshuffle, we continue to strive for global market leadership in AI-supported design".

Read the full story on derBrutkasten.de (in German).