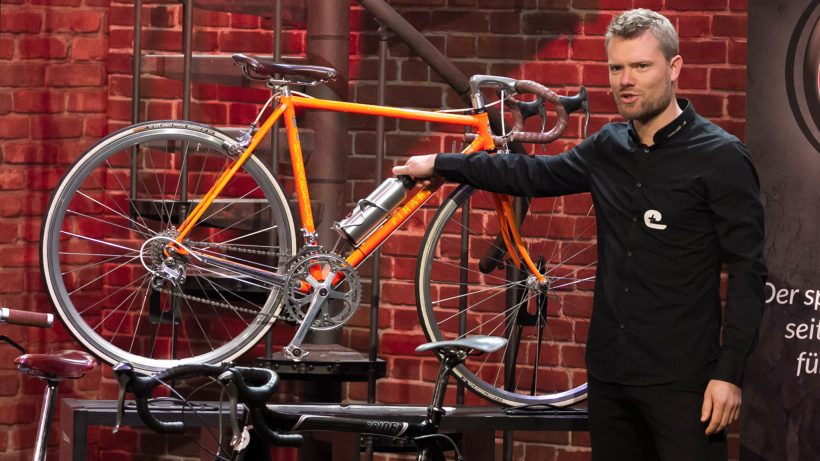 Share with others:
Tweet
On April 17 in the final episode of the Puls4 start-up show 2 Minuten 2 Milionen the CEO of GP Motion, Fabian introduced "add-e", a retrofit kit that turns an existing bike into a lightweight and powerful e-bike. They became the star of the evening!

The company's core team developed "add-e" in 2015. For the market launch, they had one of the most successful crowdfunding campaigns in Austria. The beginning was very successful and now it was time to scale-it-up to the next level. The team applied online on the  Puls4 call, was invited to pitch and in no time they were standing in front of investors.

At first, the excitement was limited. It was more about the anticipation for the appearance to happen. As the date in Vienna came closer, the excitement became increasingly strong. You never know how the jurors will react and if they will like the product at all.

Fabian and his team were confident that the investors would be pleased with the product, but they did not expect such an exciting and successful result and were even moved to tears. After some negotiations by the builder Hans Peter Haselsteiner, angel investor Michael Altrichter, food investor Heinrich Prokop and the winemaker Leo Hillinger an investment in the amount of 450.000 EUR for 26% share - one of the (!) Highest of this season - and in addition, a TV advertising budget from SevenVentures in the amount of 150.000 EUR for 4% shares. Investor Katharina Schneider also offered the innovative startup its media stop as a sales platform.

'add-e' was created during Fabian's student days. The first idea was quite simple and actually selfish: he just wanted less effort and more speed on the way to college. Therefore, he threw himself into researching and developing solutions like a small e-scooter, affectionately called "Aunt Paula Roller". Since the lead acid batteries from said e-scooter, broke after a very short time he has set out to rebuild the then still quite common lithium batteries.

One thing led to the other and so the system gradually became smaller and smaller. He then took up the concept of friction roller drive and built by various mechanical features drives for his bike, which was so small and light that he won some prizes. But actually, it was at this time still "only" games that were perfected more and more as a hobby for certain bicycles. Only in 2013, at the end of his master's degree, did this hobby become a real business model. "Blame" for that is the build! Incubator, which, as an incubator in the area of Carinthia, offers great support in the realization of business ideas. From then on, a lot has changed. The experiences of the first years were optimized in a business plan and the drive concept with some further prototypes up to a finished series product, for the assembly at any bicycle, further developed. At this time, they were still in the company for two.

Read the full story on Silicon-Alps.at (in German).